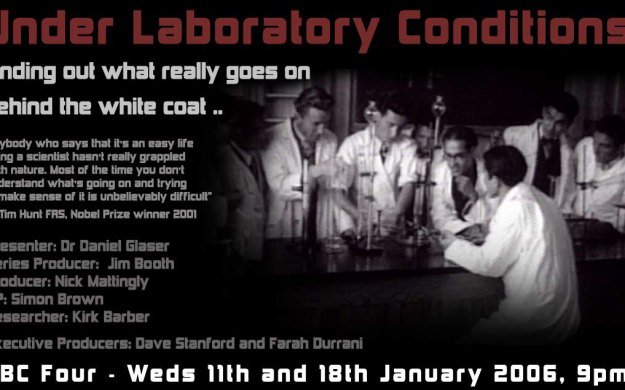 I’m surprised and pleased to note that threespeed79 has uploaded the series on to youtube. You can watch the whole thing via the playlist.

In this 2 part series UCL neurobiologist Dr Daniel Glaser takes a journey around Britain’s labs and scientific institutions to find out how science really works and what goes on behind the white coat. Nobel prize winners, professors, lecturers and PhD students reveal what it’s like to be a scientist, what motivates them, what the levers and mechanisms are that drive a scientific career and the joys and frustrations of being involved in research. For many scientists like Prof Richard Templar at Imperial College, the thrill is of the new:

All of a sudden you’ve discovered something that nobody else understands and it’s like being an explorer and discovering a new continent. It’s the most wonderful feeling.

Yet for even the most successful, the journey to discovery is arduous. Dr Tim Hunt won a nobel prize in 2001 for working out what controls cell division and cancer:

Anybody who says that it’s an easy life being a scientist hasn’t really grappled with nature. Most of the time you don’t understand what’s going on and trying to make sense of it is unbelievably difficult

Under Laboratory Conditions also reveals that contrary to the perceived image of science as a genteel and worthy pursuit of the truth, science is in fact highly competitive. Scientists speak candidly about how healthy rivalry can easily spill into professional eye-scratching and plagiarism.

With a lively Django Reinhardt sound track interspersed with science archive from 1960’s and 70’s, Under Laboratory Conditions hears contributions from Bill Bryson, Lord Robert Winston, former President of the Royal Society Lord May and head of the Royal College of Art – Prof Sir Christopher Frayling.

The second programme on the 18 th January focuses on the bane of a senior scientist’s life – funding. Daniel Glaser meets the winners and the losers of the funding game in an attempt to understand the Research Assessment Exercise, the importance of publishing in the right journal and how to squeeze money out of cash rich charities and big business.

Here you can read about credits and contributors for Programme 1 and Programme 2 .

Please feel free to send me better links if you have them.